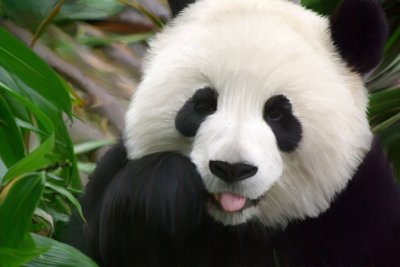 1. It is believed that pandas roamed the earth as early as three million years ago.

2. There are two main types of pandas – the giant black-and-white panda and the Red Panda.

3. Female pandas only ovulate once each year. During that ovulation period, they are only fertile for two or three days. That is one of the reasons why the population has dwindled.

4. Zoologists debate about whether pandas are bears or raccoons. They share some of the characteristics of bears, but they also have some raccoon traits. Some even believe that pandas might be their very own species.

5. Red Pandas resemble the raccoon family. They are typically reddish-brown in color and they grow to about two feet and only weigh up to 12 pounds. They are mostly found in China, Burma, and India.

6. Most newborn pandas die from diseases or because the mother panda accidentally crushes them.

7. Female pandas are not considered to be adults until they are at least five years old. For males, the age is seven years old.

8. An adult Giant Panda can grow as tall as five feet and they can weigh as much as 350 pounds. They can also consume 45 pounds of bamboo shoots in one day.

9. Pandas have been known to live as long as 35 years when living in captivity at a zoo. In the wild, they typically live about 20 years.

10. A normal adult giant panda can produce more than 60 pounds of droppings in a 24-hour period.

11. The jaw and cheek muscles on a giant panda are so powerful that they can chew up an aluminum can into small pieces. They can also bite through bamboo stalks that are so thick that humans have a hard time cutting them with an axe.

12. A panda’s diet consists mostly of bamboo shoots. In fact, that’s about 99% of what they eat. They also tend to eat other grasses as well as small rodents. The pandas that live in the zoos are generally fed a diet of bamboo, carrots, apples, sugar cane, high fiber biscuits and sweet potatoes.

13. Giant Pandas do not hibernate during the winter months. Because they have such lean diets, they do not gain the added fat that is needed in order to hibernate.

14. The giant panda is currently on the endangered species list of the World Conservation Union. It is believed that there are about 1600 pandas currently living in the wild and only about 300 living in breeding centers and zoos across the world.

15. The most significant threat to the survival of the panda species is poaching and losing their habitats.

19. There is a legend about how pandas got their black and white fur. The legend states that pandas used to be all white. One day, however, a young girl tried to save a small panda from an attacking leopard, and the leopard ended up killing the girl. The story says that the all-white pandas came to her funeral wearing armbands made of black ashes. As the pandas hugged and comforted each other, the black ash smeared and created black-and-white pandas.

20. In ancient Asia, it was believed that pandas could ward off evil spirits and keep away natural disasters.

21. In China, pandas are considered a symbol of peace. When tribes were fighting against each other hundreds of years ago, they would hold up a flag with a picture of a panda on it if they wanted to call a truce or stop the fighting.

22. In the wild, pandas typically prefer to be alone. Giant pandas cannot compete with each other for food and resources because it takes too much energy.

23. The first giant panda to leave China was named Su-Lin. This occurred in 1936 and he arrived in Chicago at the Brookfield Zoo. Before this, pandas were relatively unknown to most of the world outside of China.

24. Pandas cost five times as much as an elephant to keep in a zoo. That makes them the most expensive animal to keep in captivity.

25. As a gesture of friendship for opening relations with China, the Chinese government gave the United States two pandas for the Washington Zoo in 1972. The names of the two pandas were Ling-Ling and Hsing-Hsing. Ling-Ling died in 1992 of heart failure and Hsing-Hsing was put to sleep in 1999 due to kidney failure.